Two students from the Department of Japanese, Wenzao Ursuline University of Languages (Kaohsiung City in Taiwan) which signed a MOU with us came to Ube Kosen for internship from Monday, January 13 to Saturday, February 1. 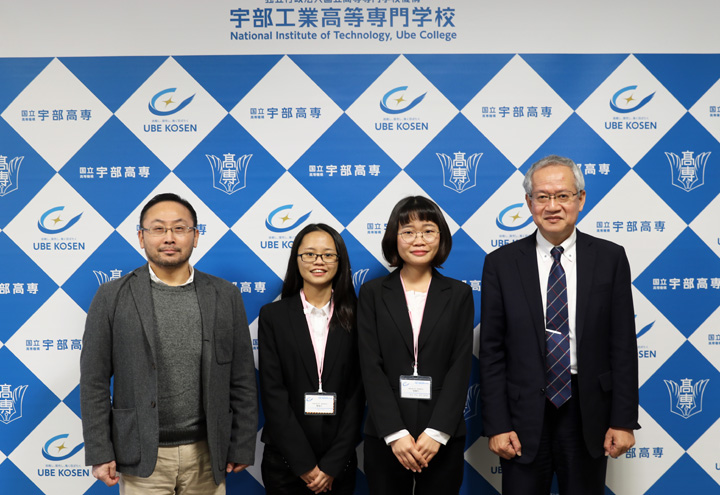 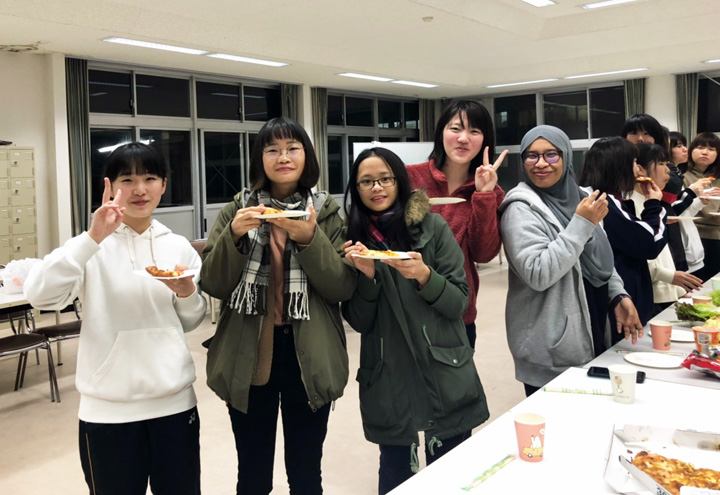 At the welcome party in Hakucho dormitory

This year was the fifth time to accept international students from overseas schools, which we signed a MOU with, as internship students at Ube Kosen. At this time, in the first week, they joined classes in the Department of Business Administration, Japanese and Social Studies classes in General Education. In the second week, they visited the Tourism and Global Promotion Department, Policy Planning Department and others in Ube City Hall and they learned how the city hall worked on tourism policies and SDGs future city. And in the final week, they worked as sales representatives and also did planning, etc. at “Asahi Seika Co., Ltd.” which was a company based on Yamaguchi prefecture and they run Kashinoki, Shuklevain, Chouchou, and others. 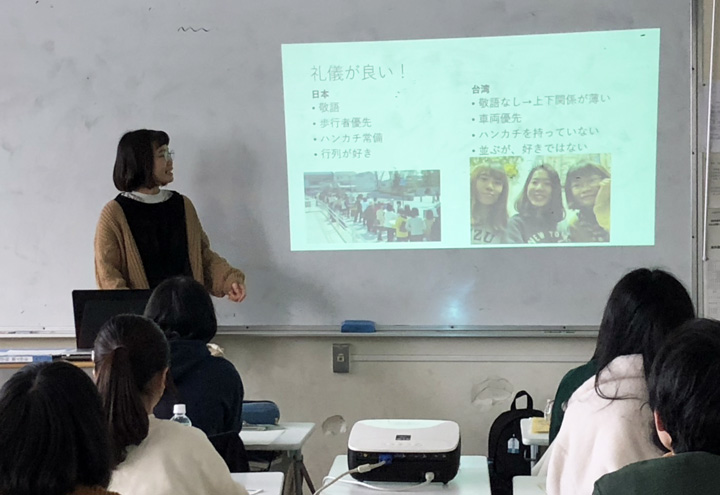 Ms. Tsai gave a presentation on the topic of “How Taiwanese see Japanese people” in the “culture and society” class of the Department of Business Administration.

It is one of the features of our international exchange which is international students we accept from schools which we signed a MOU with contribute to the local community globalization, not only in our school. This was chosen as “KOSEN 4.0 Initiative Project” of National Institute of Technology in 2017 and 2018. The project had finished last year, but we would like to contribute globalization of Ube and Yamaguchi areas in the future.

Hello, I am Hui-Chu Tsai, came from Taiwan. I came to learn Japanese to use in various scenes because I would like to be a Japanese teacher and translator in Taiwan in the future. I believe it would be valuable in my lifetime if I experience the lifestyle of Japanese young people and adults, classes and extracurricular activities at school. I would like to learn how to proceed with jobs at the Tourism and Global Promotion Department in Ube City Hall, and what kind of daily life Ube citizens have. Recently, Japanese tourists in Taiwan have increased so that I would be happy if I could help them. I would like to interact with Kosen students in various ways such as introducing how beautiful Taiwan is, supporting Kosen students who are interested in Taiwan during my stay in Ube Kosen for three weeks.

Hello, I am Yuan-Yuan Cheng, came from Taiwan. I would like to improve Japanese conversation skills by experiencing many things during the internship. Also, I would like to learn what the tourism policy or the like of Ube in Ube City Hall, and learn not only the lifestyle of people living in Ube but details of policies and issues of tourism in Ube municipality has. This would be a great experience as this would be my first time to take classes with Japanese students, also I did not have many opportunities to chat with Japanese people in Japanese in Taiwan.